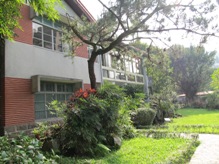 "Sushulou" was the residence of Mr. Qian Mu, a master of Chinese studies. In 1956, Mr. Qian and his wife returned to Taiwan from Hong Kong to find a place to build a house. They got the current site in Waishuangxi. To commemorate his mother’s birth and support, Mr. Qian named the "Sushutang" where his mother lived in the former residence of Wuxi Qifangqiao and the fifth generation as a reclusive residence. The courtyard of Sushulou has one brick and one stone, one grass and one tree. It is the master’s many years of painstaking efforts. The maple trees greeted by the footpath, the bamboo standing upright behind the house, and the camellia in the garden are planted by the wife herself.

Mr. Qian continued to lecture and write while he was in Taiwan. Some people listened to the lectures in the "Sushulou" for twenty years. After the students became professors, they brought the students to listen. Mr. Qian is always in high spirits in class, allowing listeners to appreciate the profoundness and profoundness of Chinese culture, and is deeply moved. Therefore, the lecture hall of Sushulou is full of seats.

After living in Sushulou for 22 years, Mr. Qian moved out at the age of 96 and found another place to live. Unfortunately, he passed away a few months later. The autonomous people moved out, and the "Sushulou" was left idle for more than a year. The government decided to open it as a memorial hall. It was initially handed over to the Taipei Municipal Library to manage it. On January 6, the "Sushulou" was officially opened. For the memorial. Later, due to the long-term disrepair of the premises, the Taipei City Government carried out a repair project in the 1990s, and subsequently transferred the "Sushu Building" to the Taipei City Government Cultural Bureau for management. The Cultural Affairs Bureau of the Taipei City Government entrusted Soochow University to operate the Sushu Building, which was renamed "Qian Mu’s Former Residence," on December 31, 1990. After nine years, it was renamed on January 1, Republic of China. Entrusted with the management of Taipei City University (formerly Taipei City University of Education). 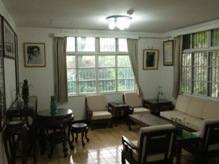 The living room of Sushulou is actually a lecture hall. Mr. Qian sits at the dining table and talks and is full of energy, while the students sit at the table with Mr. Qian or in the living room. Because of the large number of students who come to attend the class, some People even have to stand, but no matter whether they are sitting or standing, the students who listen to the lectures often listen intently, ignoring the small space of the lecture hall. This living room is the most important stage for Mr. Qian to give lectures, and it is also the best testimony of Chinese culture passing on. In the living room there is not only a statue of Zhu Zi, but also scrolls of words written by Zhu Zi, such as "Li Xiu Qi Zhi", "Reading the Book of Sages" and "Quiet God and Nourish Qi"; furniture and calligraphy and paintings are provided on loan by Mrs. Qian. 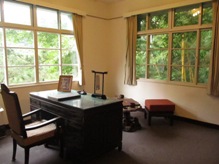 Mr. Qian's life is very regular. After getting up early in the morning, he sits in the corridor for a while, and then begins to write. My husband is always attentive and engrossed when he writes, occasionally taking a leisurely walk, taking a short lunch break, and then continuing to work. The floor-to-ceiling bookshelves are a major feature. As Mr. has a large collection of books, each shelf has two levels of books inside and outside. When he moved out of the Sushu Building, Mr. has given most of the books to friends or donated to the culture. The university library, however, it is not difficult to imagine the situation where the books are full of books. 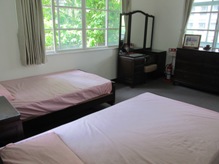 Mr. Qian and his wife support each other, and they are very affectionate, which is enviable. The simple chest of drawers and bed show Mr.'s unpretentious life. The furnishings in this exhibition space are based on the situation of Mr. Qian and his wife living in Sushulou.